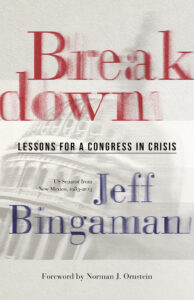 Jeff Bingaman served as a US Senator from New Mexico for five terms (1983-2013). A native of Silver City, New Mexico, he attended Harvard College and Stanford Law School. He then joined the US Army Reserve from 1968 to 1974 and was elected as the New Mexico Attorney General from 1979 through 1982. In the Senate he served on the Finance Committee; the Armed Services Committee; the Health, Education, Labor and Pensions Committee; the Joint Economic Committee; and the Energy and Natural Resources Committee, where he served as its chair. Jeff and his wife, Anne, live in Santa Fe, New Mexico.

In his thirty-year career representing the citizens of New Mexico in the US Senate, Jeff Bingaman witnessed great things accomplished through the legislative process. He also had a front-row seat for the breakdown of governing norms and the radical increases in polarization and partisanship that now plague what was once called the world’s greatest deliberative body. Breakdown: Lessons for a Congress in Crisis traces the development of congressional dysfunction over more than three decades and provides eight case studies that examine how the crisis affects our government’s ability to meet major policy challenges. We didn’t always have a Senate that failed in its basic public obligations, including catalyzing a robust economy, confronting climate change, improving health care, fixing education, preserving public lands, and avoiding unnecessary wars. We do now.

Presenting insightful analysis of the causes and consequences of the dysfunction in Congress, Breakdown shows how Congress fails at the tasks Americans expect it to perform and, more importantly, how it might begin again to succeed.

Bingaman will appear in conversation with David Steinberg. Steinberg is a freelance journalist, writing weekly book articles for the Albuquerque Journal. Before going into semi-retirement, he was a staff member at the Journal for almost 40 years. He worked as a book editor and arts writer in Albuquerque and before that was a Santa Fe-based Journal staff writer covering state government. Before moving to New Mexico, he worked for The Associated Press in New Orleans and earlier was a general assignment reporter for Cocoa (Fla.) TODAY and the Miami News.