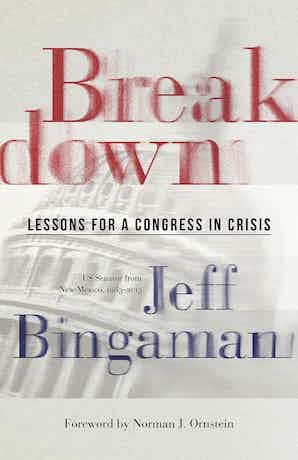 This is a free in-person event, and seating is first come, first served.

Breakdown: Lessons for a Congress in Crisis traces the development of congressional dysfunction over more than three decades and provides eight case studies that examine how the crisis affects our government’s ability to meet major policy challenges.

Jeff Bingaman served as a US Senator from New Mexico for five terms (1983-2013). A native of Silver City, New Mexico, he attended Harvard College and Stanford Law School. He then joined the US Army Reserve from 1968 to 1974 and was elected as the New Mexico Attorney General from 1979 through 1982. In the Senate he served on the Finance Committee; the Armed Services Committee; the Health, Education, Labor and Pensions Committee; the Joint Economic Committee; and the Energy and Natural Resources Committee, where he served as its chair. Jeff and his wife, Anne, live in Santa Fe, New Mexico.

Bingaman will be joined in conversation with, Dana Milbank, a nationally syndicated op-ed columnist for the Washington Post. He has also been a contributor to CNN and MSNBC and is the author of the national bestseller The Destructionists, Homo Politicus, Tears of a Clown, O Is for Obama, and Smashmouth. He lives in Washington, DC.